You’re going to need a little background music to power through this rant.

You may have heard that the red shed homestead is expanding by 1. If you didn’t.. well this is a less than exciting way to find out.

We have a three bedroom house. The Boss and I occupy the largest room, The Boy occupies the smallest. Our office is in between. With another on the way it’s time for The Boy to graduate and push all of our important things into the humid basement to inevitably be ruined by moisture or the dogs.

The basement however is occupied by several large things. Currently we have a huge treadmill, drum set, bowflex, exercise bike, dog kennels, and play area. Sorry bowflex, you lose.

I will say that the bowflex is the most heavy duty clothes drying rack we’ve ever owned so it will be a noticeable loss, but the floor space is needed.

The thing about gimick exercise machines is that they’re hard to get rid of. I tried selling it on Craigslist before with no luck. This time I decided I’d get it to a different audience and use Facebook Marketplace.

You’ll probably notice right away that it says “FREE” in big green letters. Unfortunately that’s a built in feature. I’m sure you just like everybody who has reached out to me won’t notice that it says “BEST OFFER” in the title and description.

What’s followed has been dozens of messages from people “interested” who never make an offer, one fellow who offered way too much, and a grouping of people who probably can’t breathe without the help of the ol’ instructional tape.

I don’t want to buy it, I just want to know if you still have it. You can clearly see by my shirtless profile picture that I don’t need it. I copied and pasted this response to over a dozen people that were interested but never responded with an offer or interest. 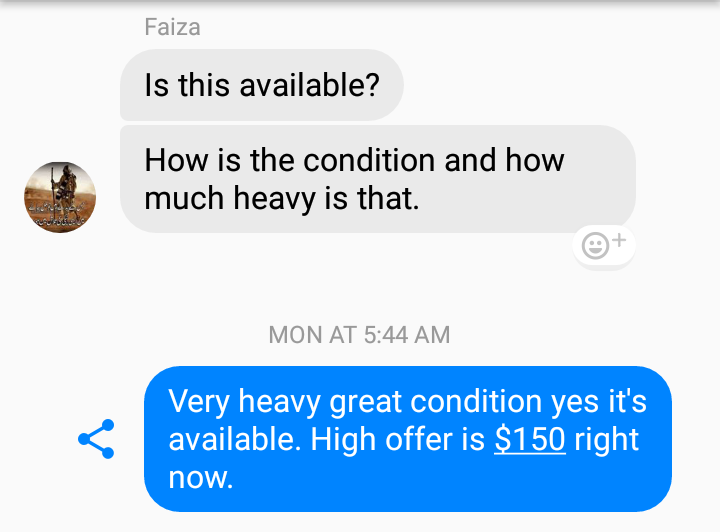 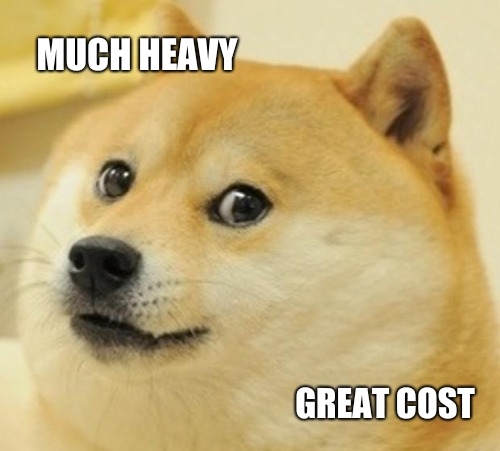 A moment of silence for Pete

You and 40 other people Ryan.

This is all you have to say to scare people away. “Best Offer” … Crickets… 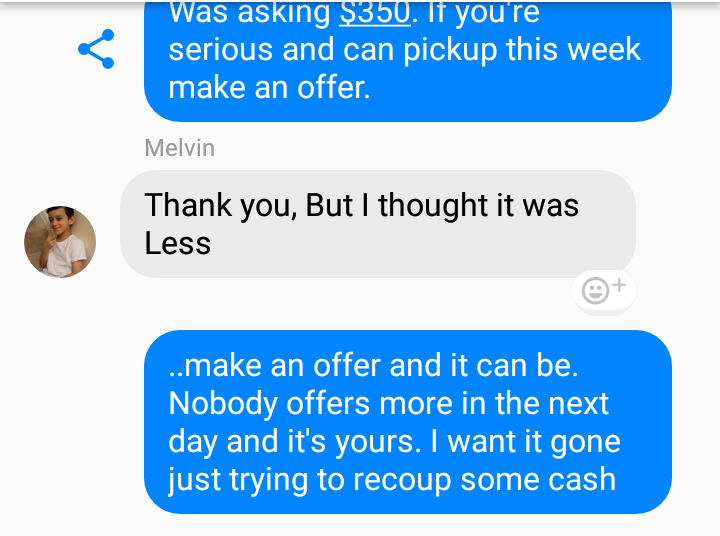 I thought you were different Melvin

This became my standard response, I have to assume if you can’t make an offer you probably are also good for a ‘no show’. I don’t want to deal with that.

I guess I never gave these people a chance.. but I get the feeling what they want is a free delivery and setup for a free piece of gym equipment.

Eduardo was one of my favorites. Apparently being stubborn can make you bilingual.

We brought that one d

Never responded to my offer.

While I was giving this “The Facebook” a try I posted a saw on Craigslist, got one hit from an interested party for full price. He showed up exactly when he said he would, handed over cash, we loaded the saw, and he was on his way after a bit of chatting. Thank you Craigslist and guy who follows through.